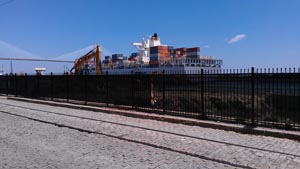 River Street is a 1 way street along the Savannah Riverfront that stretches from MLK Blvd to East Broad St that is paved entirely with cobblestones. The River Street ramps still contain many of the historic cobble stones originally laid in the 1800's when the riverfront was a shipping port and what is now retail or restaurant space was originally horse stables or storage space.

The bridge seen in the distance here was the named the Talmadge Memorial Bridge in dedication to Eugene Talmadge, who was the Democratic Governor of Georgia in 1933-37 and 1941-43. The new Talmadge Memorial cable-stayed bridge was completed in November 1991 to replace the old Talmadge cantilever truss bridge that was built in 1953, but had become a danger for large ships entering the Port of Savannah. Savannah is home to the largest single ocean container terminal on the eastern seaboard of the U.S. and the nation's fourth-busiest seaport.

The bridge spans the Savannah River between downtown Savannah, Georgia, and Hutchinson Island. It carries US 17/SR 404 Spur. The new bridge provides 185 feet of vertical navigational clearance for oceangoing sea vessels. Its horizontal clearance is 1,023 feet, with both main piers located on the banks of the Savannah River. The north end of the bridge ends on Hutchinson Island, an island situated between the Savannah River and the Back River that is home to the recently built Savannah International Trade and Convention Center, the Westin Golf Resort & Spa and overflow parking. There are 2 ferries which are free to the public that travel from River St to Hutchinson Island and back several times a day. A separate, older, two-lane bridge spans Back River, connecting Hutchinson Island with Jasper County, South Carolina which is currently being redone as well.

Savannah’s historic homes/ architecture, conferences and the Savannah College of Art & Design attract millions of visitors to Savannah, GA each year. Many of Savannah’s visitors spend a day or 2 in Hilton Head as well and vice versa. The Savannah College of Art & Design (SCAD) has drastically helped restore downtown Savannah by purchasing old historic buildings and restoring them with their Architecture and Historic Preservation courses. Broughton St. Savannah especially has been given new life with many local & chain businesses, the SCAD & Lucas Theaters and Scad’s Jenn Library. Additionally, many of the crumbling homes in the historic district downtown Savannah have been sold, restored and are rented to SCAD students. SCAD has made its campus pretty much the entire downtown area of Savannah. 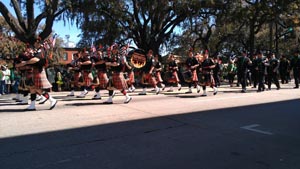 St. Patric's Day, March 17th, in Savannah is the busiest time of the year for Savannah businesses. Hotels, Bed and Breakfast's and just about any type of lodging in downtown Savannah are completely booked about a year in advance.

St. Patrick’s Day in Savannah is a week-long event celebrated primarily in the historic downtown area on River St., Bay St. Broughton St. & City Market in Savannah, GA like no other and attracts more visitors per square mile than Boston, MA or New York, NY. The entire downtown area is restricted to foot traffic only on St. Patrick’s Day to accommodate the large number of visitors each year and also for the 2+ hour parade to wind its way throughout the streets of downtown Savannah. Savannah permits open containers in the downtown area from River St. to Jones St and from MLK Blvd to East Broad St. all year long, but the law is truly appreciated during the week of St. Patrick’s Day.